A history of rich, scholarly and history-making exhibitions at Cheim and Read with Director Maria Bueno

CURATING AN EXHIBITION IS AN ART FORM IN AND OF ITSELF. THE CONCERNS ARE BOTH AESTHETIC AND PRACTICAL. A CURATOR HAS AN IDEA FOR AN EXHIBITION AND THEN STARTS TO EXPLORE THE ARTWORKS THAT WOULD BE THE FIRST CHOICES TO BEST ILLUSTRATE THE THEME. FROM A PRACTICAL POINT OF VIEW, IT IS LABOR-INTENSIVE IN TERMS OF CONVINCING THE LENDERS, BORROWING THE WORKS, EXECUTING THE LOAN AGREEMENTS, CHECKING THE CONDITION OF THE WORKS, TRANSPORTING THEM, THE INSURANCE, AND SO ON. FROM AN AESTHETIC PERSPECTIVE, THERE ARE WORKS THAT ARE ESSENTIAL CENTERPIECES OF THE EXHIBITION AND CURATORS MUST PLAN, A LONG TIME IN ADVANCE, TO ACQUIRE THEM FOR EXHIBITION.

ONE OF THE MOST BRILLIANT MUSEUM CURATORS IS SUPERSTAR HANS ULRICH OBRIST, CURATOR OF THE UNIQUE SERPENTINE GALLERY IN LONDON,  WHO CONTRIBUTED THIS ARTICLE ON THE ART OF CURATION TO THE GUARDIAN IN MARCH 2014.

IT’S WORTH THINKING ABOUT THE ETYMOLOGY OF CURATING. IT COMES FROM THE LATIN WORD CURARE, MEANING TO TAKE CARE. IN ROMAN TIMES, IT MEANT TO TAKE CARE OF THE BATH HOUSES. IN MEDIEVAL TIMES, IT DESIGNATED THE PRIEST WHO CARED FOR SOULS. LATER, IN THE 18TH CENTURY, IT MEANT LOOKING AFTER COLLECTIONS OF ART AND ARTIFACTS.

THERE’S A HANGOVER OF ALL THOSE THINGS IN MODERN CURATING. WHEN I CURATED MY FIRST EXHIBITION – WHICH FOLLOWED DISCUSSIONS WITH THE ARTISTS PETER FISCHLI AND DAVID WEISS,  RICHARD WENTWORTH, CHRISTIAN BOLTANSKI AND HANS PETER FELDMANN,  IN THE KITCHEN OF MY APARTMENT IN ST. GALLEN, SWITZERLAND – I HAD A PRODUCTIVE MISUNDERSTANDING WITH MY PARENTS. THEY THOUGHT I WAS GOING INTO MEDICINE BECAUSE CURATING MEANS CARING. I DON’T THINK THEY THOUGHT IT WAS TO DO WITH ART.

TODAY, CURATING AS A PROFESSION MEANS AT LEAST FOUR THINGS. IT MEANS TO PRESERVE, IN THE SENSE OF SAFEGUARDING THE HERITAGE OF ART. IT MEANS TO BE THE SELECTOR OF NEW WORK. IT MEANS TO CONNECT TO ART HISTORY. AND IT MEANS DISPLAYING OR ARRANGING THE WORK. BUT IT’S MORE THAN THAT. BEFORE 1800, FEW PEOPLE WENT TO EXHIBITIONS. NOW HUNDREDS OF MILLIONS OF PEOPLE VISIT THEM EVERY YEAR. IT’S A MASS MEDIUM AND A RITUAL.

IN THE GALLERY WORLD, CHEIM & READ IS KNOWN FOR ITS EXCEPTIONAL GALLERY EXHIBITIONS.

WHAT ARE SOME OF THE CRITERIA FOR CONSIDERING AN ARTIST’S REPRESENTATION? ARE THEIR SPECIFIC STEPS, AS IN TESTING THE WATERS WITH GROUP EXPOSURE, OR DOES IT DIFFER IN EACH INSTANCE?

It differs in each instance, but the most important component of considering representing an artist is that the artist’s work fits within John Cheim’s curatorial vision and also complements the artists whom we already work with – context is extremely important to us and it is important all of our artists’ work can have a meaningful dialogue when shown together. 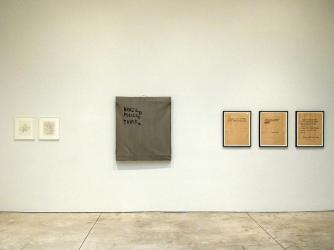 WITH A TWENTY YEAR HISTORY, THIS BECOMES AN IMPOSSIBLE QUESTION BUT WHAT WOULD YOU CONSIDER SOME OF THE MOST OUTSTANDING SOLO EXHIBITIONS?

Impossible question, indeed! Some that come to mind are IN WORD ONLY by Jean Michel Basquiat, Joan Mitchell FRÉMICOURT PAINTINGS, Louise Bourgeois SUSPENSION, and Al Held’s BLACK AND WHITE PAINTINGS.

N.B. To coincide with two major retrospective exhibitions of Basquiat’s work at the Brooklyn Museum, New York and the Museo d’Arte Moderna, in Lugano, Switzerland, in 2005, Cheim & Read presented an exceptional exhibit entitled “In Word Only” that focused on the paintings, drawings and notebooks that celebrated the use of the written word and its significance.  This exhibition was the first to exclusively feature Basquiat’s unique and significant use of language.

WHAT DO YOU CONSIDER SOME OF THE MOST OUTSTANDING GROUP EXHIBITIONS?

N.B. THESE ARE JUST A VERY FEW EXAMPLES OF THE SCHOLARSHIP AND INTELLECTUAL RIGOR THAT CHEIM & READ HAS INVESTED IN A TWENTY YEAR PERIOD WHEN CURATING WORKS FOR AN EXHIBITION. THE EXHIBITS ARE ACCOMPANIED BY BEAUTIFULLY CONCEIVED CATALOGUES THAT INCLUDE AN ESSAY ON THE EXHIBITION AND IMAGES OF THE WORKS.

A prescient two part exhibition on the female form as seen through the eyes of women artists and men artists took place in September 2009 at Cheim and Read.

DO YOU INVITE GUEST CURATORS OR DOES THE THEMATIC IDEA FOR AN EXHIBIT REST WITH HOWARD AND/OR JOHN OR WITH THE GALLERY STAFF AS A GROUP?

The majority of our exhibitions are conceived and curated by John Cheim but on occasion we do invite artists like Jack Pierson to curate exhibitions. We have also had independent curators like Raphael Rubinstein curate exhibitions such REINVENTING ABSTRACTION which focused on New York abstraction in the 1980s as practiced by a generation of painters born between 1939 and 1949.

IN OUR NEXT LRFA BLOG POST, MARIA GIVES HER ASTUTE PERSPECTIVE ON THE PLACE OF ART FAIRS IN THE CURRENT MARKET.