Matthew Barney, born in 1967 in San Francisco, is a brilliant American sculptor and video artist whose five-part Cremaster film cycle received enormous acclaim for its inventiveness and beauty. Art critics consider him one of the most significant artists of his generation.

Following his graduation from Yale University which he attended on a football scholarship, Barney moved to New York where he had his first one-man show in 1991. This and later shows were composed chiefly of videotaped recordings of performance art—notably one in which the nude artist climbed the walls and ceiling of an art gallery.

His Cremaster series, named for the muscle that raises and lowers the testicles, explored  sexual differentiation, the process of development of males and females in human embryology and the various stages of creation, both themes that are central to much of Barney’s work. From his first performance art creations, Matthew Barney has represented the ultimate in  boundary breaching and athleticism, in his early gym-centric installations and testosterone-fueled performances—forms and activities that would culminate in that supremely ambitious filmic chain of unforgettable vignettes, the Cremaster cycle, 1994–2002.

The series consists of Cremaster 4 (1995), Cremaster 1 (1996), Cremaster 5 (1997), Cremaster 2 (1999), and Cremaster 3 (2002), which together are provocative and visually rich exercise in suggestive psychological fantasy and myth.  Barney directed and wrote each video and appeared as an actor in most of them; their consummate special effects were accompanied by a pictorial lushness have earned them a nearly cult following.

It is with great anticipation that the LRFA blog looks forward to viewing Matthew Barney’s latest film, REDOUBT, which draws on the artist’s ongoing fascination with mythology. The story draws on Ovid’s tale of Diana, Roman goddess of the hunt, and Actaeon. Matthew Barney: Redoubt explores the topical political issues of gun ownership and land use in the United States. The film follows a sharp-shooter in her pursuit of wolves across the winter wilderness of Idaho’s Sawtooth Mountains. She is accompanied by two dancers moving in dialogue. 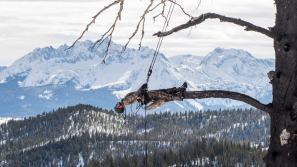 Barney appears in the film as an artist working for the US Forest Service. He tracks and observes the hunter while making a series of copper etchings.  A hoop dance by an indigenous contemporary choreographer is the catalyst for the wolf hunt’s dramatic conclusion. The film has been hailed as ‘breathtakingly beautiful’ by the New York Times. It uses choreography to weave together the story of Diana and Actaeon, cosmology and modern American political narratives. 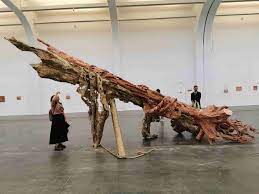 Billed by the Hayward Gallery  as “one of the most ambitious and provocative artists of our time”, Matthew Barney, the former Mr Björk, has become a huge name on the international art scene without individual works making a particular impact – certainly not in England. And given that his best-known work, the Cremaster Cycle, is a series of five feature-length films – with accompanying drawings, sculptures and installations – in which Barney himself plays a tap-dancing satyr and mass murderer Gary Gilmore, it isn’t surprising that this is not art that can be instantly absorbed or pigeon-holed.

Video art, form of moving-image art that garnered many practitioners in the 1960s and ’70s with the widespread availability of inexpensive video recorders and the ease of its display through commercial television monitors. Video art became a major medium for artists who wished to exploit the near-universal presence of television in modern Western society.  By the 1980s and ’90s higher production values and a closer intersection with installation strategies began to surface in the works of artists such as Matthew Barney, Pipilotti Rist and Bill Viola. x 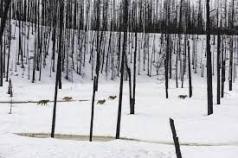 The LRFA blog remembers with great pleasure an absorbing all-day visit to the Guggenheim Museum to view Matthew Barney’s epic work consisting of five feature-length films that explore processes of creation. The cycle unfolded not just cinematically, but also through the photographs, drawings, sculptures, and installations the artist produced in conjunction with each episode. The exhibition filled the museum in a site-specific installation designed by the artist to encapsulate the five-part cycle, combining all its varied components into one cohesive whole. 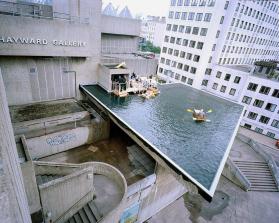 Opened in 1967-68, The Hayward Gallery is an art gallery within the Southbank Centre, part of an area of major arts venues on the South Bank of the River Thames, in central London.This complex of buildings was designed by a group of radical young architects given astonishing freedom to innovate. At the time, neither the Tate nor the National Gallery were able to hold temporary exhibitions so Hayward Gallery immediately filled a vital lacunae in London’s art world. Early pioneering shows included the first solo large-scale UK shows by Bridget Riley and Anthony Caro.

THE OPENING OF THIS FILM, IN LONDON, IS A TRUE CELEBRATION OF THE CYCLE OF THE END OF THE COVID-19 PANDEMIC.  IT IS THE FIRST SOLO MUSEUM PRESENTATION IN THE U.K. IN OVER A DECADE.

Barney explores the dynamic relationship between humanity and the natural world, and the role of artistic creation.

The etchings featured in the exhibition were produced on location. The large-scale sculptures are cast from the burnt remains of trees from the region. Barney combines traditional casting methods and digital technology to create artworks of formal and material complexity that reflect on the story told in the film.