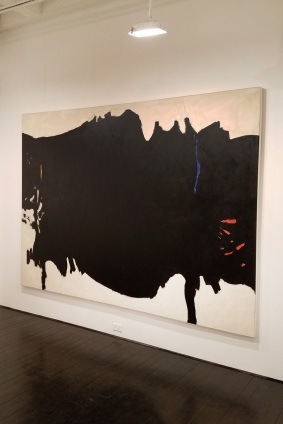 THE ROMANTIC MOVEMENT FIRST GAINED MOMENTUM AS AN ART FORM IN FRANCE AND IN BRITAIN IN THE EARLY NINETEENTH CENTURY. IT EMERGED IN RESPONSE TO THE DISILLUSIONMENT ON THE PART OF EUROPEAN INTELLECTUALS WITH THE ENLIGHTENMENT’S ALLEGIANCE TO REASON AND ORDER AND AS AN ARTISTIC RESPONSE TO THE 1789 FRENCH REVOLUTION. DELACROIX’S EMOTIVE NARRATIVE MASTERPIECES AND TURNER’S IDYLLIC LAND AND SEASCAPES EXEMPLIFY THE SENSIBILITY OF THIS PERIOD.

ABSTRACT EXPRESSIONISM, A MOVEMENT THAT FLOURISHED IN NEW YORK IN THE 1950s AND 1960s, HAS MANY PARALLEL HISTORICAL AND AESTHETIC QUALITIES. ABEX DEVELOPED IN RESPONSE TO MORE CEREBRAL CUBIST-INSPIRED MODERNISM AND AS A BY-PRODUCT OF THE EXPANSIONIST NATURE AND GROWTH IN AMERICA FOLLOWING THE VICTORY OF THE ALLIES IN WORLD WAR II.

IN THE ART OF THIS PERIOD, NATURE – WITH ITS UNPREDICTABLE POWER AND VOLATILITY OFFERED AN INSPIRATION TO ARTISTS WHO EMBRACED THE ROMANTIC ASPECT OF ABSTRACT EXPRESSIONISM AS EXPLORED IN INSIGHTFUL ESSAY BY GALLERY DIRECTOR AND ART CRITIC, HOWARD HURST, THAT ACCOMPANIES THE EXHIBITION OF EDWARD DUGMORE: THE SIXTIES.

THE EXHIBITION OF DUNMORE’S PAINTINGS AND WORKS ON PAPER CONTINUES AT LORETTA HOWARD GALLERY, 521 West 26th Street, THROUGH MARCH 25th, AT 521 WEST 26th STREET IN CHELSEA.

The romantic impulse to embody nature rather than to simply illustrate it can be traced to a favorite influence of Dugmore’s: the English poet and painter William Blake, who’s own ambition was to render the contemplation of nature as a transformative experience. This belief in the magical properties of nature stems from a lifelong fascination with Native American life and culture. He grew up reading his fathers collection of National Geographic Magazines with wide-eyed admiration. His first trip through the Rockies in 1948 was highlighted by an encounter with the Hopi and Navajo cultures.

His reverence for these cultures, re-ignited during the 1960s, coincided with a broader cultural shift, as artists and intellectuals across the Western world began to look for cultural reference points outside of the Judeo-Christian world.  The bold contours of Aspen Quartet recall the hide of a stretched buffalo, which was the subject of the artists first painting, at the age of seven and which remains an important symbol in various Native American traditions. We are reminded by the reverent tone of this work that the Rockies themselves are a consecrated space, host to the northern most of the four sacred mountains of the Navajo. 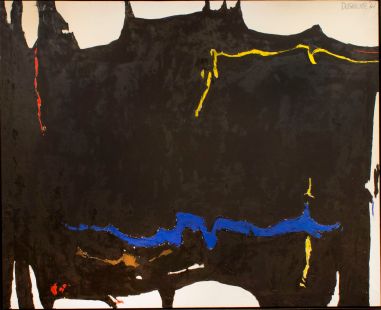 Equally important were Dugmore’s yearly trips to Mid-Coast Maine, where he and his wife, the photographer Edith Oslund-Dugmore, purchased land in 1954 along with fellow artists Ernie Briggs and Anne Arnold. A selection of ink drawings from the early 1960s highlights the important influence of this environment on the artist’s paintings of the next ten years. The artist sketched the landscape, often times interpreting the evocative silhouette of craggy shorelines and wooded banks through their reflection in the choppy waters that swirled through the areas rivers and rock coves.

The forms in these drawings and paintings conjure a vision of the natural landscape that is bound to the power of human experience. The physical world becomes a touchstone and reference point for the inner life of the artist. The foreground melts into the horizon; the sky breaks apart and becomes the floor. 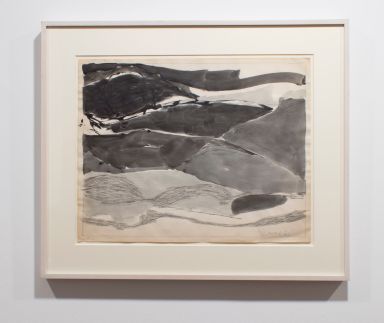 MANY THANKS TO LORETTA, HOWARD AND EMILIE AT THE LORETTA HOWARD GALLERY FOR BRINGING THIS EXHIBITION TO THE LRFA BLOG!